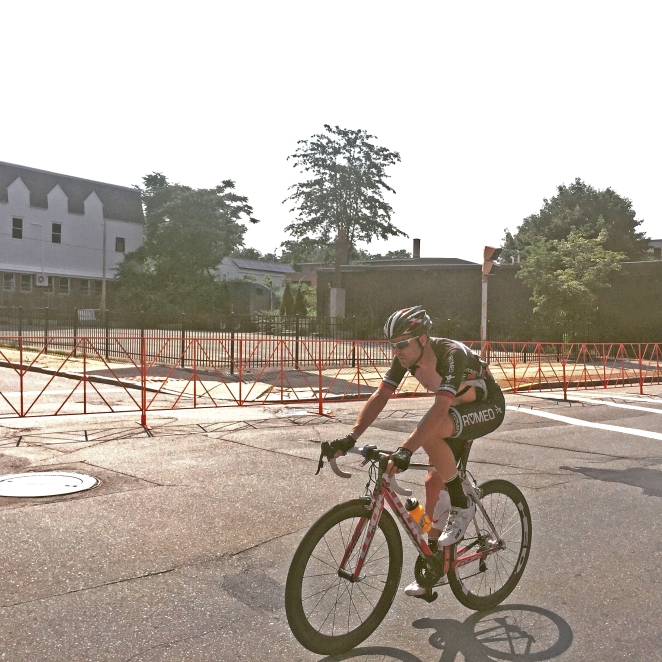 I wasn’t sure how I would rebound from my crash at Beverly. An easy spin Friday afternoon and again Saturday morning revealed a sore knee, stiff neck and tired legs, though the tired legs may have been just as much from the three days of racing or the newly arrived heat as from the crash.

Saturday was only getting hotter. But dry. At least an early evening start time might allow things to cool down a bit.

I lined up with an ice-sock stuffed down the back of my race suit and low expecations. I had done minimal warm up. It seemed more likely I would overheat before the race than get my legs anywhere close to race-ready.

The start was sane and manageable. Around the first corner, the sweet smell of fresh haybales hit me. Summer was underway.

After 15 minutes, the pace was picking up, the front stretching out, then came the first of the attacks. I was well positioned and jumped onto the back of the early breakaway. Ten riders with some strong guys. I looked over my shoulder. We had a gap. And a good one. I got nervous; if we would stay away and I’d be out there for another 40 minutes.

But the group wasn’t organized. Strong riders with teammates back in the field were skipping pulls. I was doing what I could to preserve momentum without giving too much effort. Then, when we got far enough ahead some of the riders back in the pack got nervous and they started to chase. After 14 laps out there, we returned to the bossom of the peloton.

It wasn’t until after the race, talking with Curtis White in the parking lot, that I realized we could had lapped the field if only we’d been a bit more organized and committed.

I settled in. Recovered.

My Pavlovian response: a flyer for some Crit Week points.

I managed to bury myself for 4th place and zero points.

After that, I figured I was pretty much done. I was satisfied. I had been out in front. I had made some efforts. My body seemed to be ok.

Then Ezra told me he’d be going to the front with 5 to go. I was welcome to join him. So I did what I could to find his wheel. I was railing the third turn, a fast right-hand sweeper, with a tight inside line that brought me perilously close to the haybales and again that sweet smell. It was a rush, especially the time I clipped my pedal.

With 2 to go, I was well positioned, but needed to be a little further up.

Final lap, I got pushed out on the first turn, fought back in on the second, carried my speed into the home stretch, stood up and sprinted. I may have even passed another a rider or two, ending in 20th place, matching my best race of Crit Week to-date, but outside of the coveted top-10 I had been seeking.

After the race, I took many, many cool down laps to try to spin my legs out for tomorrow.

Fitchburg wasn’t going to be pretty. 50 mile race. Mid-afternoon start. Temperatures expected to be in the mid-90’s. I was hoping just to finish. Death march seemed like the right term for it.

The race was simple and excruciating.

Some guys could handle the heat better than others. Or maybe they were just willing and able to push their limits further. But after a few calm laps, those guys started to attack.

My heart was rev-limited from the start. I was running 5-10 beats below normal when, in the heat, I usually run that much higher. My body’s way of telling something. Like time to quit.

My wife was in the feed zone — feeding at her third race ever — and managed a flawless performance. First feed of a musette with a cold bottle and fresh ice-sock. Three more bottles of cold water, most of which I doused on myself.

Along the way, I pitted with a front flat, rejoined the race without issue, and tried to hang on. The pace could be described as liesurely and I was struggling even with that. Maybe it was the heat, or the distance, or the accumulation of 5 races in 8 days, but I was cooked. Literally roasted. I could feel the heat rising off the tarmac on the back stretch. I think I had stopped sweating.

With 10 to go, I was nearly out of water. The feed zone was closed. My legs were blocking up. No cramps. But no power. No resilience.  I hung on desperately, knowing that we would soon be lapped and have one less turn to do. With 2 to go, I came unhitched, managing my effort to get to the finish for the simple statement of saying I did.

I wasn’t last but I was close.

At least 20 riders abandonned due to the heat.

But it was over. I had come to Crit Week, never managed to find my best form, but survived and even enjoyed it. At its best moments,  I raced in and of the moment, reveled in the glory of the suffering that is the sport. At its worst, I simply felt old and outgunned.

But at its best…that’s what keeps me going, I guess.