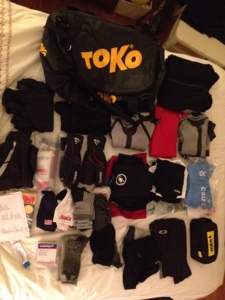 This is what 6 days worth of ski gear looks like. I’m heading north to Mont Sainte Anne in Quebec where they’ve had plenty of snow. While up there I’ll ski twice a day, eat lots and try to recover.

Not pictured: skis (2 sets each classic and skate), boots, wax boxes, lots of food, boot dryer, and the car to haul it all. 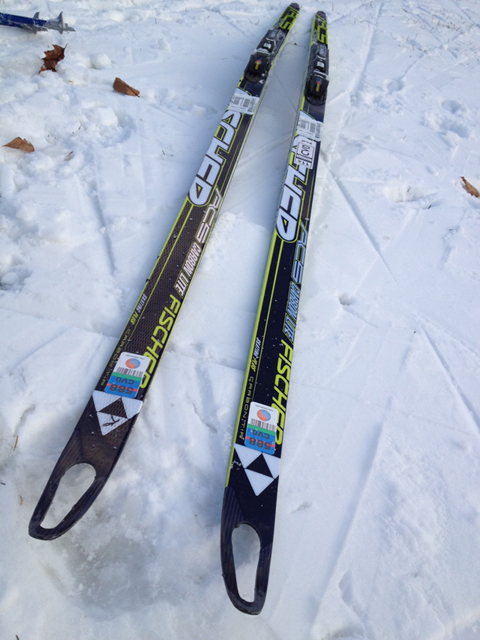 I’ve been dreaming of a white Christmas, just like the ones I used to know:  the ones that involved skiing on snow.  Thanks to Weston Ski Track and five mighty snow guns, they’ve delivered just in time.  With cold overnight temperatures forecast for the next few days plus the chance of some real snow, things are looking up.  Yesterday, I was rollerskiing in the parking lot.  Today, skating on some nice white stuff.

This morning’s session:  8 x 3 minute intervals at race pace.  The snow was warm and slow (hey, I’m not complaining about snow).  I was on my rock skis — which I haven’t waxed since last March — because I wasn’t patient enough to scrape and brush my race skis.  So I worked extra hard just to keep the ski moving.  Heart rate was in the 175 bpm range.

The afternoon, I took my new race sleds out for an easy ski with my son.  Far more enjoyable on fast skis, on faster snow, and without the dry heaves that come with intense intervals. 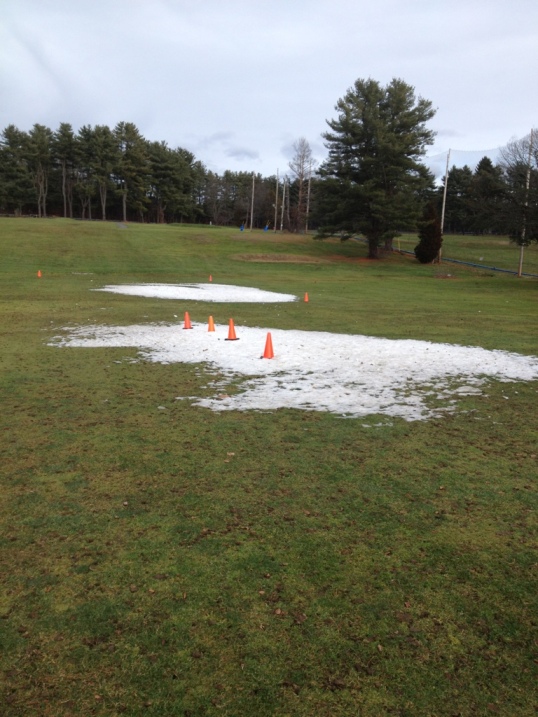 The rain and warmer weather of the past week killed off the little patch of snow we had at Weston.  So I was back on rollerskis today, which feels oh so wrong this late in December.  It’s starting to feel like the climate has really changed and it might be time to move further north or to take up water skiing.

There is skiable snow a few hours away in New Hampshire but the Christmas schedule doesn’t allow me to disappear for a day to get up there.  So I’ve filled the down time in the usual manner:  ercolina, core strength workouts, hillbounding, running, rollerskiing…and something new for me, rest.

I plan to hit this season fresh and recovered — though I’ve been on the edge of overtraining, under recovering and too many other committments — which means I’ve been tring to sleep more, stretch more and make sure I’m ready to go. 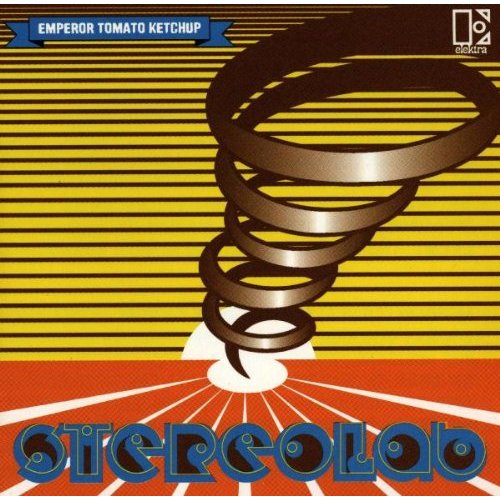 1996 was my make or break year in cycling.   I decided focus on the “Fresca Cup” which was a national race series for riders without pro contracts.  My strategy was to race as many of these races as I could, place well in them, and finish somewhere in the top 10 overall.  It was an ambitious goal and one that I thought would help me to secure a pro contract.

In the late summer of 1996, I was back in southern Vermont for my six or seventh Killington Stage Race.  I had lost count of how many times I had done it.  Killington was the first multi-day stage race I ever did.  In 1988, I raced it as a junior.  I finished in fourth place, behind George Hincapie who won it, then went on to do some great things on the bike and some not so great things to get there.

Just a few days before, I had finished the Tour de ‘Toona — four days of racing and 15 hours in the car driving to western Pennsylvania and back – and I was lining up again for another 5-day, 577 km stage race.  I had barely recovered.  If at all.

I was still sitting in the top-5 in the Fresca Cup series, hoping my position would hold and that it would be enough to ensure next season.  Thus far I had gotten no offers nor any interest.  ‘Toona had been a good race.  I had some top finishes, something to notice, and keeping the momentum at Killington was critical.

END_OF_DOCUMENT_TOKEN_TO_BE_REPLACED 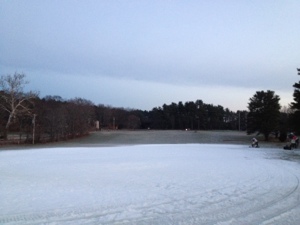 On my second day on snow, I skied in the early morning at Weston.  It was dark when I started.  My eyes strained to see the details of the terrain with the meager light from my head lamp.  I did skate for an hour on the 200 meter track.  I did at least 50 laps, switching direction every 5 laps so I wasn’t constantly turning to one side.

Dawn was just breaking as I finished up.  Total distance for the morning was 11 km.

In the evening I went back to Weston with my son, who was equally excited to be on the snow.  I did classic this time, using the tried and true Toko Base Green Binder for the manmade snow.  Another 40 or so laps, this time sharing the track with 60 plus kids from Dover-Sherborn high school.  My classic technique came back quickly.  I had feared that all summer and fall on rollerskis would have set me back. This year should see another big step up for my classic skiing.

On the way back home, my son said he can’t wait for a real snow storm. 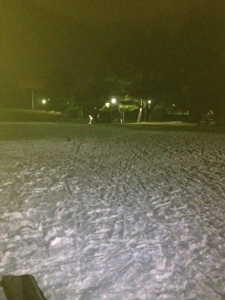 It may not look like much.  The darkness hides just how small the patch is. But the wizards at Weston Ski Track have made snow.  Just about 200 meters worth so far but it’s enough to get on the skinny skis and feel something slick underfoot.

It only took a few laps for the feel of the snow to return.  Then I jumped right in, doing a speed workout with the CSU kids.  One lap fast, two laps recovery.  Repeat several times with V2, double-pole and no-pole skate.  I felt pretty cracked and sloppy by the time I was doing the no-pole.

But it didn’t matter because I was back on snow.

So happy I can finally put away the rollerskis until next year! 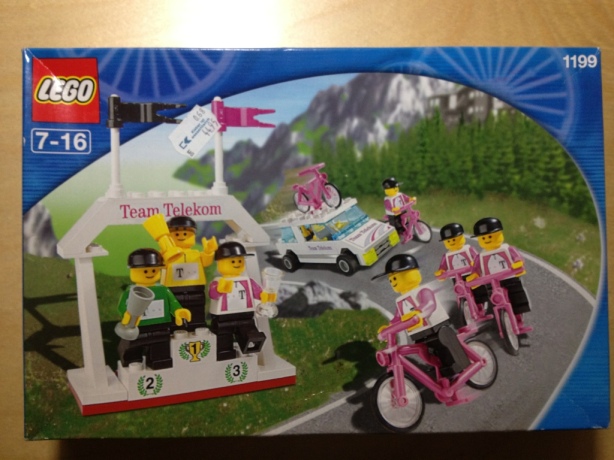 I found this blast from the past in my attic while looking for Christmas decorations.

This is a Tour de France – Team Telekom Special Edition from 2000.  It was developed specifically for the German market, hopeful that Jan Urlich would take his second Tour win.  Ironically, with Lance Armstrong stripped of all his Tour de France victories, Ulrich ends up top of the podium.  At least, he would if he weren’t also a convicted doper.

These guys are still the box. Unopened. 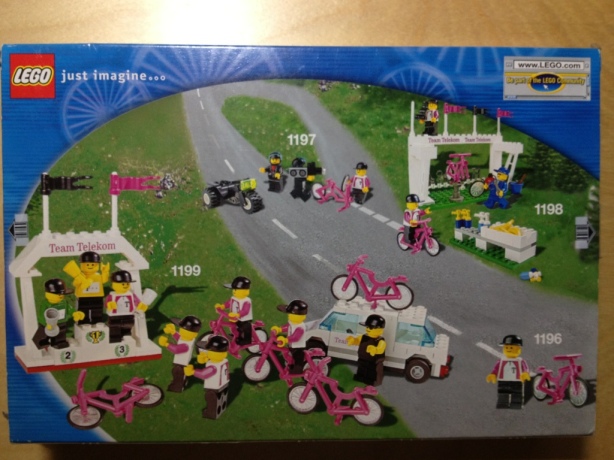 the Purity of Speed
Blog at WordPress.com.